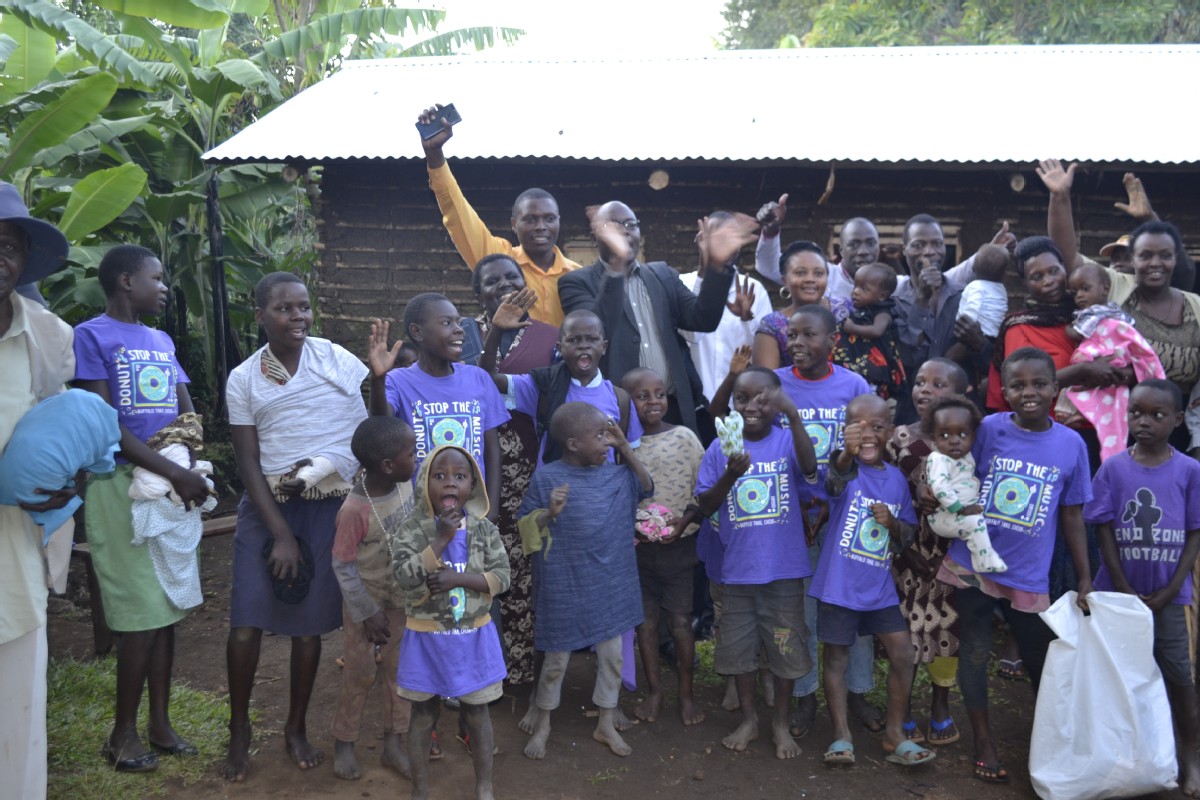 Mr Ainganiza has been in the newsroom for the last 15 years, besides his journalism work, he has found passion in helping vulnerable people in his community.

He says the vision of helping vulnerable people in his community, started in 1991.

He says, after reaching senior two, he was forced to drop out of school due to the domestic violence exposed t him by his step mothers who never wanted him to progress in his education.  However, his luck came after one Dr Keith Morton from England   working with the Africa Inland Mission in 1991, picked him from the garden and took him back to Nyakasura school and paid fees up to senior six.

Mr Ainganiza says when he completed school, he opted to study journalism, in 2006 he started working with Voice of Toro and his aim was to report stories of Gender Based Violence (GBV) and other human rights items from police and community because the majority of vulnerable people are always at the police in need of help.

“I started by going to police and court to report stories, but because of my background .I wanted to see how I can help other people who are vulnerable, I could write such stories of vulnerable to see I advocate for their rights,” He said.

He says later, he started engaging police and couples with cases at police to see that people receive justice.

“Because my face was common at police of Fort Portal, they started calling me in case there were such cases of gender based violence, child neglect and abuse , we could sit in reconciliation meeting, move together in field,”

Mr Ainganiza says using his little salary, he could help neglected children and battered women found by police by tracing their parents to see that they are rejoined to their families. He could also put announcements on radio.

“I could use my transport go to communities to look for vulnerable people, give them help on how they can follow up their cases at police, others I could give them counseling services,” He added.

In 2010, he decided to start PLATFORM for NEEDY (PLANE) as a Community Based Organization (CBO) in his area to see how he can formally start support vulnerable people.

Ainganiza says Dr Keith who helped him, had over 1000 vulnerable children from all over the country; he supported at different education levels. This he said inspired him to start PLANE to ease his advocacy work.

“Before starting, I made several consultations from my friends, majority of them welcomed the idea, some of the people started supporting me,”

He says his first formal activity was in 2011 when he mobilized Shs 3 million ($845) from Kabarole district and bought goats for 37 widows and elderly people to engage them in income generating activities, a project that is progressing well.

He also started advocacy work in 2012, registered 60 needy children, mobilized resources and bought for them scholastic materials and uniforms to enable them access education.

In 2014, he upgraded and registered his CBO into a Non-governmental Organization operating in Rwenzori region but permitted to operate countrywide.

In 2019, Ainganiza started several campaigns in Fort Portal and Kabarole district to help vulnerable people who were approaching him through his Family Clinic Radio Talkshow that handles health, social and economic aspects.

One of the campaigns included helping 28 -year- old woman Sharon Kyoshabire who was abandoned by her husband Kiiza James after producing triplets.

Ms Kyoshabire who was a mother of four children, in Bukuku Sub County, Kabarole district, after producing triplets, the husband after being overwhelmed by the needs, developed stress, ran away and left her in a dilapidated house at verge of collapse but Ainganiza launched a campaign that restored her life.

“The woman was left with children, in her dilapidated banana fibre thatched house .It was raining as if it was outside and coldness wanted to rob the little children .I started the campaign of looking for money to buy food for the children and money to build her decent house,”

Under the campaign “ Save Abandoned Triplets From Death, Provide Shelter “, Ainganiza collected about Shs 6 million ($1,689) from well-wishers , school children, churches and he used the money to build her a house, kitchen , pit latrine, buy food, milk , clothes and pay fees for the older children.

He says after his intervention, given the opportunity, I plan to have another campaign to raise funds to construct a permanent house for these triplets and educate them in good schools.

In the same year, Ainganiza also mobilized over Shs 20 million Uganda shillings ($5,634) for saving the life of Brian a youth who needed heart surgery and pace maker programming in Nairobi Kenya.

Using drama in creating awareness, Ainganiza has trained several youth groups that perform in different communities to create awareness of issues that need advocacy such as sleeping under mosquito nets, Ebola, ending domestic violence, having manageable families through embracing contraceptives, HIV/AIDS prevention, and child abuse among others.

“Together with the youth, we record drama that is played on radios to create awareness in communities and I’m proud of educating and sensitizing my community,”

Mr Ainganiza has also helped many teenage mothers in the sub counties of Kabarole district to start income generating activities, and also educating them about their rights, nutrition for their children, saving and credit and the danger of teenage motherhood.

Using his newsroom salary ($197), Ainganiza has helped many children to complete school by paying them school fees, giving them career guidance one of his children he supported by paying his fees has completed senior four. “I’ve helped Joel Tinyesengereza completed his senior four. He scored 25 aggregates (1ST GRADE) 2020 UCE. He approached after he was chased from Nyakasura School and Fort Portal SSS for failure to pay tuition. I like Joel because is bright and boasts of becoming a medical doctor,” He said.

He says in the last 15 years, over 110, 000 their mind set have changed and over 200 vulnerable children and 108 women have been helped directly.

“I have used my skills,  mobilized resources for vulnerable people, created awareness on different issues in the community such as gender based violence, malaria, children rights, mobilized people for health conferences  among others, all these have been achieved,”

Ainganiza  says, “In 2018 the Kabarole district health officer Dr Richard Mugahi said the use of drama in creating awareness in communities about sleeping under mosquito nets, the malaria prevalence reduced from 50 percent to 12 percent according to statistics at health facilities,” Dr. Mugahi awarded Ainganiza’s organization PLATFORM for the NEEDY with a certificate rewarding them for their efforts to educate and sensitize the people using drama in schools and communities in Kabarole and Bunyangabu through the campaign dubbed : “Community Campaign For Social Mobilization (SCSM) sponsored by PACE”.

In 2018, Kabarole district local government awarded him for being an outstanding journalist in helping vulnerable people and using his radio program (Family Clinic) and Bahemuka drama that have continued to create awareness.

Ainganiza says the biggest challenge is resource mobilization both locally and internationally to help the big number of vulnerable people in the communities saying people who need help are more than resources available.

“I have written several proposals but I’ve not been successful. I’ve also written many letters seeking for partnership with national, local and international organizations but I see people have negative attitudes towards partnership and helping small organizations stand out.  In the last 15 years, I’ve not received any external funding from donors I am always helped by friends and my small salary ($197) per month but I would like to thank PACE Uganda for the funds they gave us to sensitize people and school children  in Kabarole and Bunyangabu  districts on malaria control and prevention,”.

He says in 10 years to come, he wants to quit the newsroom and concentrate on programs of helping vulnerable people in communities’ because it’s where he has the passion.

“I shed tears when I see husbands battering their wives, young girls producing children, their partners neglecting them and when I see needy children storm my office and the radio that their parents have refused to care for them. It’s hurting! I will have to quit and concentrate on these people and I will only be coming for drama and talkshows,”He said.

Mr Ainganiza says he is proud to be in partnership with some institutions and well wishes. He narrates that Local partners have helped him to achieve some of his dream of helping vulnerable people. The partners according to Ainganiza include Kabarole district local government, Christ Aid International, PACE, Girls Not Brides, Voice of Tooro 101 FM primary schools, Dr.Fr.Pascal Kabura Director Bishop Magambo Counsellor Training Institute.

Ainganiza appeals to all people to have manageable families, produce children by choice ,not by chance because it leads to the suffering of innocent children who would be enjoying love and care of their parents. To the parents, I’m calling upon you to prioritize parenting and talking to your children mostly the girl child about the sexual reproductive health rights and the future they want. Girls, prioritize education, avoid peers and engaging in early sex if you want a bright future.

I’m appealing to the general public and people of good will to continue supporting us. We are seeking for national and global partnerships with individuals, institutions, churches, corporate companies and volunteers to help us reach more vulnerable communities. I had wanted to upgrade and get masters but I can’t because of lack of funds and this God’s work. Any institution or good Samaritan willing to offer me scholarship is blessed by God.

For more information about AINGANIZA STEVEN and PLATFORM for the NEEDY (PLANE) https://platformfortheneedy.org/

More from WorldMore posts in World »