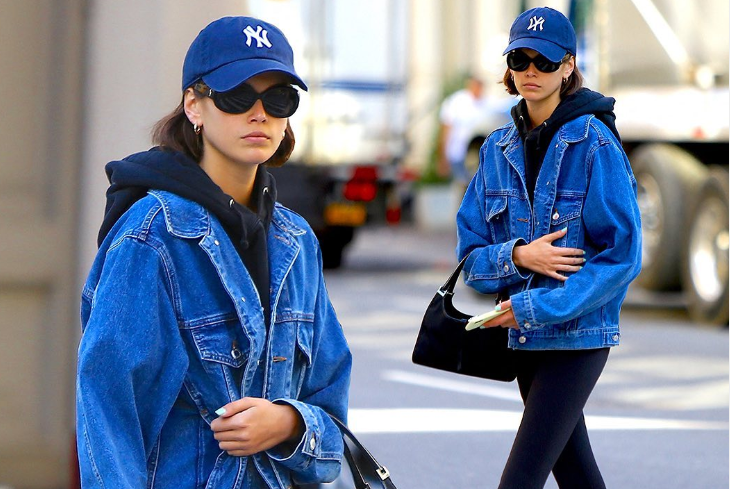 Gerber was spotted in the Big Apple yesterday clad in an outfit she so effortlessly three on. Casual street style has never looked so chic. The 18-year-old wore a hoodie under an oversized jacket for her top. She then threw on some comfy black leggings and paired it with white sneakers.

Looking to cop her kicks? The sneakers are from the Adidas x Alexander Wang collection. Its sleek design features leather paneling, gum application at the outsole’s rear and a sock-like fit. It’s one heck of a splurge though because it initially retailed for USD250. However, you can get it on sale on certain sites for just USD175.

The supermodel kept things low-key with a blue baseball cap, black oversized sunglasses and a bucket handbag that looks like it came straight from the 90s.

Gerber has recently been the subject of headlines in numerous gossip outlets after she was spotted in two outings with Pete Davidson. The comedian was seen leaving the model’s apartment over the weekend. The sightings have sparked romance rumors between the two. Vulture reported last week that the SNL regular has broken up with his former lady love Margaret Qualley.

Davidson is known for his string of high-profile relationships. He was previously romantically involved with pop sensation Ariana Grande and British actress Kate Beckinsale. If recent reports are true, we might be seeing Gerber at Davidson in a romantic relationship soon.

Linda is our news editor. Sharing the same vision with TDS, Linda aims to contribute further to the progress of every headline by publishing updates and views relevant to the topic. Aside from news publishing, Linda is also an entrepreneur and an excellent public speaker.