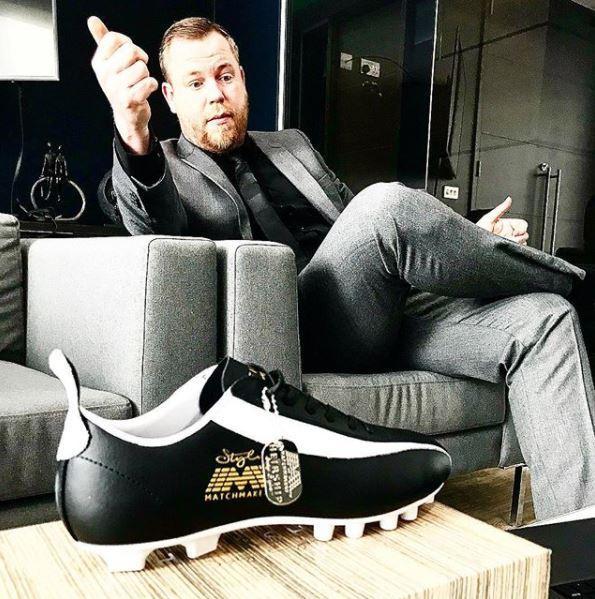 The iconic football boots brand Stylo Matchmakers has made an incredible comeback thanks to the investment and leadership of British entrepreneur Scott Michaels. As a long-time fan of football (soccer), and of the legendary athletes like Pele who sported Styo Matchmakers boots, Scott is fully qualified to bring this iconic brand back into the spotlight for a new generation of players and fans.

Scott answered some questions about his journey relaunching Styo Matchmakers nearly 20 years after people had thought it had demised.

Hi Scott, how did you first hear about the original Stylo Matchmakers brand and what inspired you to relaunch it in 2017?

Since receiving my first pair for Christmas at just five years old, I fell in love with football boots.  Fast forward 30 years and lots of cool brands have removed themselves from the market.  I pieced together the history or Stylo Matchmakers, and I thought “wow this is cool”. Football icons like Pele, George Best, Kevin Keegan, Bobby Moore, Brian Clough, Bill Shankly and many more donned the boots.  The history of the brand cannot be erased or copied.  I have always personally not liked to follow the crowd.

What were some of the initial challenges you had to overcome in bringing this iconic brand back to life?

The most frequent question I get is:  How are you going to compete with the £100B brands in the most competitive sport in the world? My answer is we don’t.  We zig where the other brands zag. I actually wrote down all the things the big brands do, and we do the opposite.

We promote history with limited edition boots where the big brands promote technology, and we use real quality leather on our products instead of synthetics. We encourage value to grassroots football with discounts rather than support big retailers.  We promote equality in the game, not paying players on seven-figure endorsement deals. We are currently producing a ‘Black Lives Matter’ football boot designed to promote the campaign, and profits from sales will be supporting the cause.

What is unique about Stylo Matchmakers’ football boots when compared to other brands?

Stylo Matchmakers is the first-ever designer football boot brand.  Big corporate brands dominate the market, and it’s not healthy. Not everyone wants to wear the same brand, and there are pockets of communities that are forgotten by the big brands.  Our brand appeals to consumers who want to be different and don’t follow the crowd.

We focus on the classic element of the shoes rather than investing in pointless technology to make marketing claims.  While our boots are limited edition classics, they offer great comfort, and they are lightweight. Premier League champion Christian Fuchs wore the boots last season with several other respected professionals. We do not pay big endorsement deals as we prefer to offer discounts instead.

What was the impact of the then world’s best football player Pele signing with Stylo Matchmakers in 1966?

Signing Pele was a fantastic deal for Stylo Matchmakers as football was massive with England hosting the 1966 World Cup and eventually lifting the trophy.  I believe Pele is the greatest footballer of all time with three-time World Cup winner scored 727 goals during his glittering 21-year career.

How did the contract with George Best in 1968 change the way footballers worked with brands?

George Best changed the way footballers advertised products. David Beckham should have thanked George for how he led the way for footballers to become brands of their own. Stylo Matchmakers signed George Best on the back of his European Cup win with Manchester United in 1968 as well as his Ballon d’Or  (voted the worlds best footballer).

George designed the boots himself, with over a million pairs of Stylo Matchmakers sold during this time. George Best was one of the most talented footballers ever to play the game. Lots of young footballers should check out videos of George on YouTube. The guy was way beyond his time and was more of a rock star than anything else. George Best was a true maverick, and he brought lots of joy to football.

Brian Clough was introduced to the boots in 1974 as Leeds United when he took over from Don Revie. Clough also signed the full team at Nottingham Forest in 1975 before they dominated Europe with winning the European cup twice in a row.

Bobby Moore signed a boot sponsorship with Stylo Matchmakers in 1975 with the full Fulham FC squad which reached the FA cup final against his former club West Ham United.

What are the main differences in Stylo Matchmakers shoes between then and now? For example, has modern manufacturing improved the overall quality of the products?

Stylo Matchmakers were the first innovator of football boots and developed groundbreaking patents on some of the first injected plastic outer soles used today. Before that, they used wood, and the boots and were held together with nails. As you could imagine, this was very uncomfortable, and the boots would rot away when wet.

Since I started developing the Stylo Matchmakers Heirship Reboots in 2016, I have used modernized materials but kept the old school values and styling of the brand. I am thrilled with the products we have developed, and we have a strong relationship with the family-owned factory in China. An ethically responsible supply chain is a massive part of who were are. In my opinion, this is overlooked by the more prominent brands who are cost driven to generate profits for their shareholders, forgetting about the repercussions.

Due to the COVID-19 lockdown, you have had some time to work on writing a fictional TV series based on the incredible story of Style Matchmakers – can you tell us a little about it?

Yes, I run several businesses that have been affected by COVID-19, and it has given me some time to be creative. I am very excited about this as I have never written a TV Show before. I thought the brand has a unique story and mixed with a period fictional drama it would educate while entertaining the viewer.

The seventies was a cool part of history as fashion and music kicked on. I see the show which I have called “The Boot” exploring history similar to The Peaky Blinders and Mad Men hit TV series. I have written the first series, but I am in talks with a co-writer and executive producer to license the project to one of the big TV networks.

Thank you Scott for your time!
You can follow up with Scott Michaels at https://stylomatchmakers.com